The following things are not big enough to deserve their own pages.

Some of this stuff may already exist online or be otherwise known. 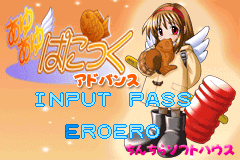 Ayuayu Panic is a PC taiyaki-collecting, ice-block-destroying platform puzzler by Chinchilla Soft House, starring Ayu Tsukimiya from Kanon. It was officially (as in by the same people, not as in licensed by Nintendo) ported to the Game Boy Advance.

Of particular note is the "PASS" feature, which allows you to enter a 6-letter password. At first you may think it unlocks levels, but no- it actually enables access to some H-images if you have it set as EROERO.

Judging by the developer's page, it was a safety measure to prevent under-18s from seeing the images. How you were supposed to actually figure out the password in the first place is a mystery to me, though.

Incidentally, if you really want to see the images and have the PC version, the .PIC files are actually just BMPs. Open them in a hex editor and replace the first two bytes with BM, and the next four bytes with the little-endian file size. 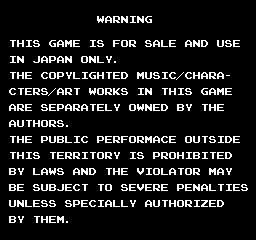 Esper Dream 2 for the NES has an unused "copylight" screen. It was clearly meant to be shown on hard resets, but got dummied out. Here is a part of the reset code:

As you can see, there are separate handlers for soft and hard reset, but they all end up initializing the same game mode. The mode that shows the screen is $08, so we can re-enable it by patching $E4A3 with the value $08. Or you can just use Game Genie code AEZTLK. 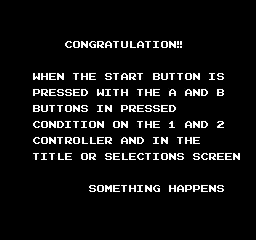 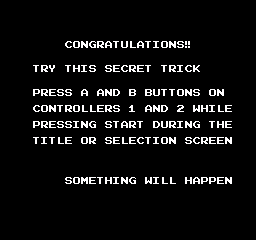 Ice Hockey for the NES has a secret screen describing some cheat codes if you patch CPU address $FFE0 ($DFE0 in the FDS version) with the value $ff. This area contains just a build date string.

On the NES version, you can just use the Game Genie code NNTYEN. On the FDS version you will have to actually use a memory editor and patch the byte, then soft-reset.

Here is the code (in the NES version) that does the check:

As far as I can tell, there is no code anywhere else in the game that actually shows the screen. It might've been some button combination on boot, but got dummied out by redirecting the read to a ROM location.

Interestingly, despite the unused-ness of the screens, the text was polished up in the NES version. The cheats mentioned are already known. 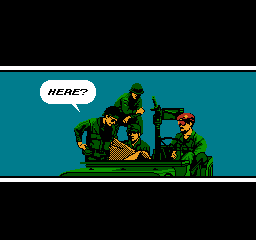 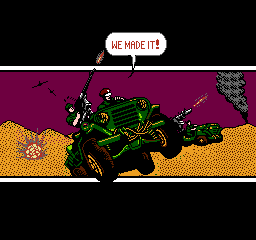 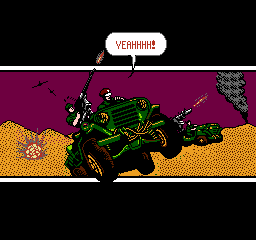 Did you know that Jackal for the NES has three end-of-level screens, not just two?

Which one you get is determined by RAM variable $50, which holds player 1's current secondary weapon power level. The selection/uploading code is at $C719.

Megapanel is a Mega Drive sliding-tile-puzzle game from Namco with a lot of nice graphics. Here they all are. Some of them are kind of racy, so just be aware of that before scrolling.

Also see the program I wrote to rip them all.

Xevious is a famous arcade game from Namco that was ported to the NES. I have designed a Lua script for Mesen that shows all bombable objects, which can be used to find the hidden things in the game. I've confirmed it works with all versions of the game.